API & Tools to operate any Blockchain easily. NFTs made easy.

A high-level overview of the technology changing our world Blockchain is a distributed database technology that allows for secure and transparent record-keeping of transactions. It is a decentralized system that does not rely on a central authority to maintain its records, which makes it highly resistant to tampering and fraud.

One of the key features of blockchain technology is that it is highly secure. This is because each block in the chain is connected to the previous block through the use of cryptographic techniques, which makes it nearly impossible for anyone to alter or delete the records without the consensus of the network.

There are several different types of blockchain, including public and private blockchains. Public blockchains are open to anyone and are typically used for cryptocurrencies, such as Bitcoin and Ethereum. Private blockchains, on the other hand, are restricted to a specific group of users and are often used for enterprise applications.

What are the benefits?

One of the main benefits of blockchain technology is its ability to eliminate the need for intermediaries in transactions. Because the transactions are recorded and verified by the network, there is no need for a third party, such as a bank or financial institution, to facilitate the transaction. This can significantly reduce the cost and complexity of transactions, making them faster and more efficient.

Another benefit of blockchain is its transparency. All transactions are recorded on the blockchain and are visible to anyone who has access to the network. This level of transparency can be particularly useful for businesses, as it allows for increased accountability and trust between parties.

In addition to its use in financial transactions, blockchain technology has the potential to revolutionize a wide range of industries. For example, it could be used to track the supply chain of products, verify the authenticity of documents, and even facilitate the secure exchange of medical records.

Blockchain is in its infancy, with big opportunities for its future

While blockchain technology is still in its early stages and there are many challenges to overcome, it has the potential to significantly impact the way we conduct business and interact with one another. As more and more businesses and organizations adopt blockchain technology, it is likely to become an increasingly important part of our daily lives. 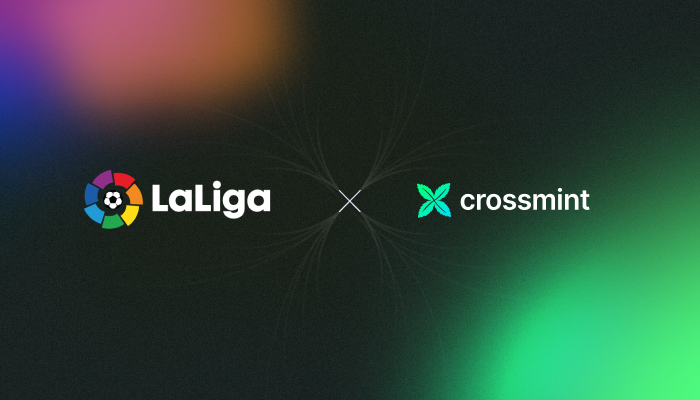 Crossmint Partners with LaLiga to Bring Soccer to the Metaverse

Soccer enthusiasts who join the LaLigaLand community get access to meet and greets with players, enter drawings for game tickets and merch, and enjoy post-match events with other fans. How to Create a No-Code NFT Prepay Site

Sell your NFTs before your mint even goes live In just a few months since its launch, Hadeswap's NFT AMM has processed 1 million SOL in transaction volume - now, traders can pay for NFTs in fiat or Ethereum with Crossmint.